Out of Touch Leaders

Yes, climate change is a burning issue of today. But we cannot ignore the fact that California has made some improper choices thanks to our out of touch elected leaders who have NOT been addressing our core challenges, and we are beginning to pay the price for it. PG&E is a prime example of what we are dealing with.

In the video below, Rep. Anna Eshoo gave a speech during the evening of August 26, 2020 at the CalFire news conference. If you did not believe that Congresswoman Eshoo was out of touch — you need to hear her excerpted 2 minute speech in this video below. Our citizens were worried and stressed about their home, their belongings as they watched the Calfire news conference looking for an update. Instead, they got Rep. Eshoo’s rambling speech, attempt at humor and clearly demonstrating how out of touch she is.

#1 Rep. Eshoo doesn’t know this? QUOTE “…there were orange jumpsuits. And those were the individuals from the California Department of Corrections. They too have been trained in fire fighting. They work the fires. …I didn’t know that,…”

#2 Rep. Eshoo is blissfully ignorant about the fact that having inmates on the fire lines is a paramount social justice issue and changes need to be made. As per Rep. Eshoo, “I salute them for doing their fair share.” To not be aware of the issue, never mind their involvement, is inexcusable.

Rep. Eshoo first ran for Congress in 1988, and a lot has happened since then. Congresswoman Eshoo hasn’t challenged the sacred cows like she said she would in 1988, but has sold out to the Washington system.

Why Rishi deserves a keen look

Here (<— click) are some key differences between Congresswoman Eshoo and Rishi Kumar’s candidacy; please read and arrive at your own conclusions why someone like I deserve your consideration in the November election. For far too long, voters of our congressional district have not paid attention to the wrong doings and the gross violation of trust. We need independent thinking leaders — not ones who are herd mentality driven, or ones who play partisan politics in Washington instead of solving real problems.

In 2014, when I was running for Saratoga city council, a question was asked at the October candidate’s forum. “Is Saratoga’s tree ordinance perfect. Yes or No?” There were 5 candidates running and I was the only one who answered a simple NO. That is why we won that election…just kidding.

But there is independence, prudence and common sense with how I operate as an elected leader, and we bring the “getting things done” persona from the world of tech. My motivation in public service is to solve the big challenges — as that is personally very fulfilling to me. And I can handle a kitchen sink thrown at me, no issues at all.

Rep Eshoo is out of touch with Tech.
Under Rep. Eshoo’s watch, Cambridge Analytica and Facebook harnessed private citizen data illegally for nefarious purposes. Facebook is in our congressional district, and Silicon Valley voters deserve a representative who understands when to step in to protect the people from a misaligned tech mission.

As we enter the final push to win this race, I need your support:

Please donate: Our fundraising was impacted by Covid-19. But we are pushing! Help us fight the tainted money in politics by making a small contribution. We only accept money from people, not PACs or Special Interest Groups — unlike Rep. Eshoo who gets at least 50% of her campaign money from PACs.

I need sunshine..a voice heard from the lawn sign sitting in the garage. If you had our campaign lawn sign, please bring it out and plant it out on your lawn. Or you can request one. Our campaign team will deliver one to you.

Our allegiance is squarely with the people, exemplified by my track record in Saratoga.

.
Rep. Eshoo was out of touch at the debate too 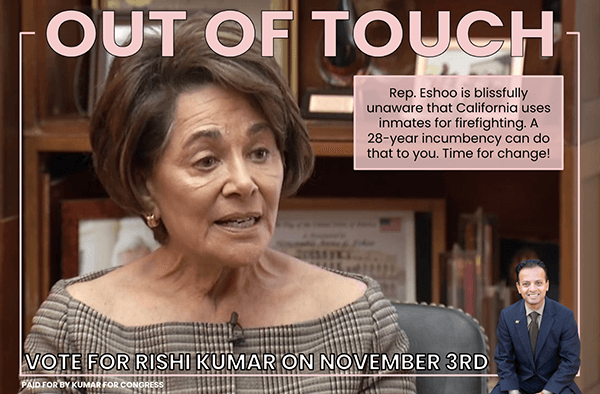 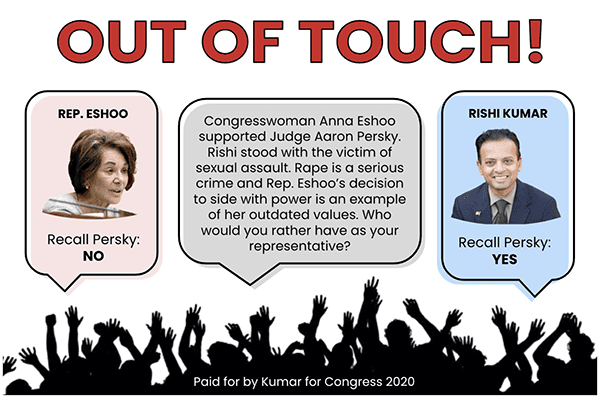 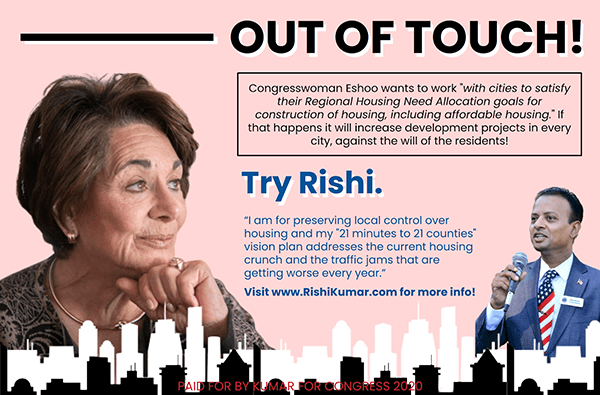 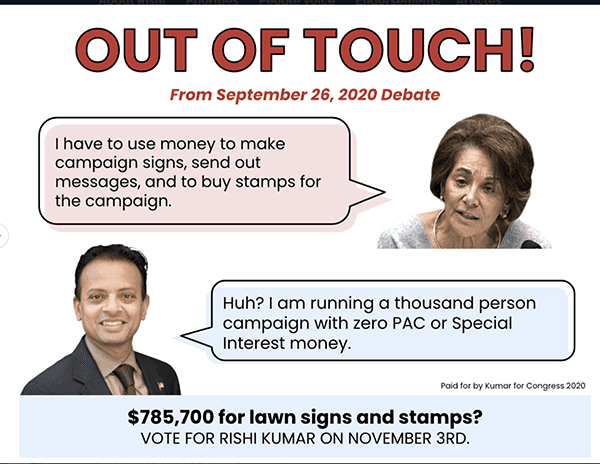