For far too long, our Congressional representatives have been unable to make progress on the most important issues of our time. Pandemic Preparedness, Healthcare, climate change, racial inequality, police reform — you name it, and I share your frustration. And it’s all because of two words: Citizens United.

Thanks to that dreadful Supreme Court case, lobbyists, special interest groups, and corporations have been flooding our elections with billions in donations, directly influencing the way our elected officials legislate. Let me be clear: that’s not the Congress I believe in, and that’s not the way I’ll do business when elected as your Congressman.

That’s why last month, my campaign sent a letter to End Citizens United (ECU), an organization dedicated to overturning the Citizens United case. I respectfully requested that End Citizens United review and reconsider its ‘A’ rating for Rep. Anna Eshoo (CA-18), awarded on January 15, 2020. It is my belief that her record is in stark contrast to the principles and values behind the End Citizens United movement, and pose a serious threat to American democracy. I wrote to ECU not only because of my belief that everyday Americans need to take our democracy back — but also because my opponent, Anna Eshoo, has an alarming record that should concern every voter in this country.

As the top recipient of donations from the pharmaceutical and healthcare industries, Rep. Eshoo went against President Obama and passed laws making it easier for Big Pharma to keep drug prices high. Her former staffers are lobbyists and Vice Presidents for major pharmaceutical companies. And when pressed by reporters, her response?

“I’m not out to punish” them. Try telling that to the 37 million American adults who can’t afford their prescriptions.

It all comes down to this: Should the Chairwoman of the House Health Subcommittee aka Rep. Anna Eshoo — a position that wields exceptional power in shaping healthcare legislation for every American in this country — really be the #1 recipient of Big Pharma and healthcare money in the House? That’s a blatant conflict of interest, and not how our democracy should operate.

It’s time to stop making excuses. From day one, I’ve said what every elected leader in America needs to say: no corporate PAC money, no special interests, no lobbyists. Because our democracy is best when it’s responsive to YOU, the American people.

Would you please consider contributing to help our grassroots campaign bring this fight to Washington?

We only accept campaign contributions from people like you and me and will keep it this way. Forever!

The COVID-19 crisis has left millions of Americans unemployed and stunted our economy. We need to grow our economy and add jobs. America’s highly outsourced pharmaceutical supply chain makes us vulnerable to emergencies like the COVID-19 pandemic, a future biowarfare or even bioterrorism. It has become a national security issue.

In the past two decades, the American economy has lost over 5 million manufacturing jobs alone. Our country is currently involved in disastrous free trade agreements that leave us economically disadvantaged. To address the Personal Protective Equipment challenge that our front-line American health workers experienced during the pandemic, we must develop a self-reliant supply chain, reduce our economic reliance on China, and bring manufacturing jobs back to the U.S.

In addition, these unacceptable trade deals must be re-examined and potentially re-negotiated. That’s why I support the push to create an improved version of NAFTA in the form of the USMCA. USMCA incentivizes companies to invest in the United States. I believe the USMCA can serve as a model for trade deals going forward. Improving existing trade deals will bring jobs back to America and address America’s income inequality challenge. This is a key differentiator between Rep. Eshoo and myself. Rep. Eshoo has consistently voted in favor of trade bills that led to depletion of American jobs such as NAFTA and TPP. That is why I have refuted the endorsement of Rep. Eshoo by California Labor Federation, AFL-CIO, NUHW and SEIU in a letter that was emailed to these organizations.

As your congressman, I will prioritize rebuilding Silicon Valley’s vibrant economy, creating jobs and opportunity in the post COVID-19 world. As a hi-tech executive, I understand what it takes for our Silicon Valley innovation to succeed and for the gains to spread to our middle class and working-class families — we most promote job growth and income equality, creating opportunities for all. Here is my policy for our innovation economy.

I invite you to discuss this at our Sunday town hall meeting. RSVP here.

Congresswoman Eshoo was endorsed by Stanford Daily earlier this year. 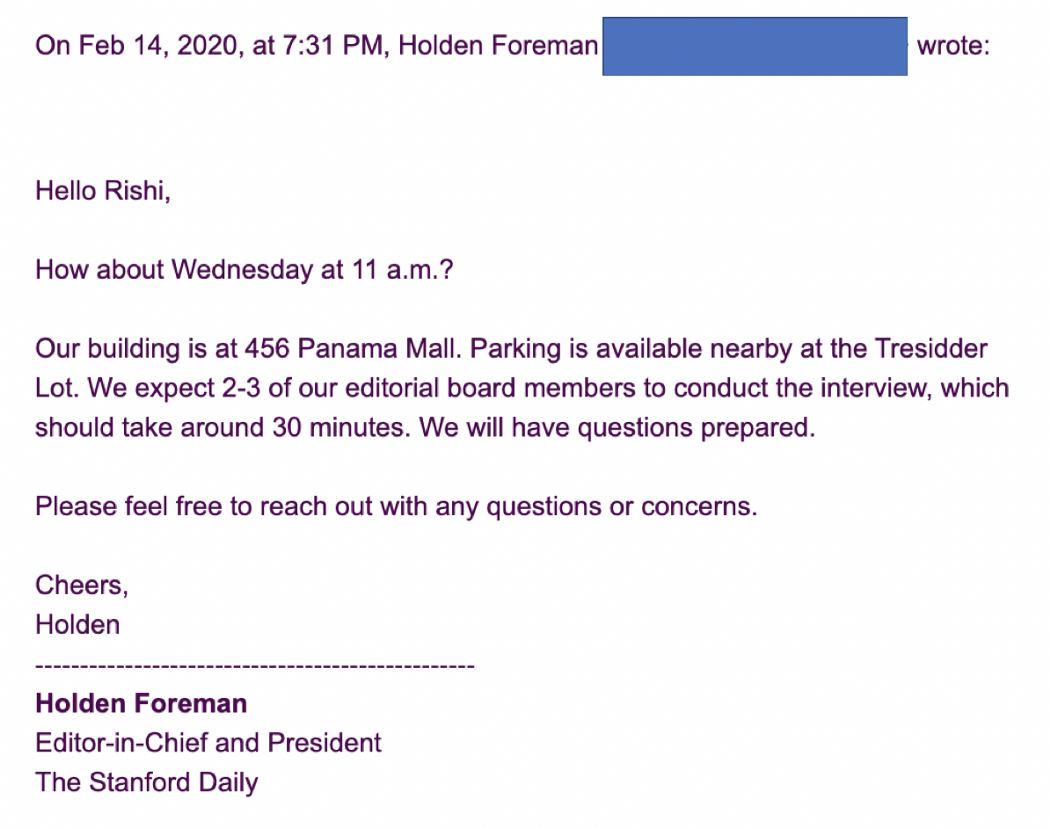 Rishi Kumar was also invited to the interview with — see email excerpt on the left. “We expect 2–3 of our editorial board members to conduct the interview, which should take around 30 minutes.”

Arriving at the 456, Panama Mall building expecting a 2–3 editorial board, Rishi was surprised to be interviewed by a single sophomore student. The interview was recorded.

Quote from the Stanford Daily endorsement article:
“Democratic challenger Kumar has campaigned on getting big money out of politics, pointing to the significant corporate lobbying directed at Eshoo. In her career, Eshoo has accepted close to $1.8 million in contributions — more than any other member of the House — from PACs for and individuals affiliated with the pharmaceutical industry. She is currently the Chairwoman of the Subcommittee on Health, tasked with regulating pharmaceuticals.

Eshoo responded to this critique in a statement to The Daily, admitting she received significant contributions from the health care community. She said the reasons for these contributions included her “expertise, tenure and geography,” among others, noting that as a senior member of the House she has run 16 times in a district that has a large concentration of biotech firms employing many people who are her constituents. Nevertheless, we are concerned by the donations she has accepted from the pharmaceutical industry.

Campaign contributions happen due to “expertise, tenure and geography” as Rep. Anna Eshoo states, or perhaps they are meant to subvert and stymie the people agenda?

“Expertise, tenure and geography” are simply buzzwords to distract us from the real issue: our politicians are being bought by major pharmaceutical companies.

How much of an influence should large corporations have in Congress? Do we want the voice of American people stifled and suppressed?

Shouldn’t we be looking to bringing ethical integrity into politics as the very future of America hinges upon it? We believe that such an endorsement contradicts Stanford’s role as a pioneer in political issues and an educational institute that is a beacon of innovation.

Big Money has polluted American politics for far too long. Is this the example that Stanford wants to set for its students?

As the more progressive candidate who has pledged to NOT accept PAC money and NOT be bought by large corporations, we urge Stanford Daily to reconsider it’s endorsement of Anna Eshoo.

We are already starting to see some of the devastating effects of climate change in California with wildfires running rampant across the state. That’s why now more than ever, we need a climate-forward candidate who has a solid foundation for which we can lean on for solutions to this climate crisis. As someone who values the Sierra Club’s esteemed history and stance on climate issues, I believe that endorsing Rep. Anna Eshoo for Congress is a mistake.

Rep. Eshoo has a weak history on climate change. Much of Rep. Eshoo’s work on climate change is all talk, no action. She has condemned President Trump’s decision to withdraw from the Paris Climate Agreement, but when you look deeper, what has she actually done to impact climate change on a national scale? In 28 years in Congress, her track record only consists of passing a bipartisan carbon pricing bill, the Energy Efficient Government Technology Act (using efficient technology for the federal government) in 2019 and the Electric CARS act (extending tax credits to help consumers purchase electric vehicles) in 2019; too little, too late. Co-sponsorship of the Green New Deal resolution does not mean much. What matters is what original policies did you champion. Not a whole lot.

Scientists have been warning us about the life-changing impact of climate change since the 1970s. Rep. Eshoo’s lack of meaningful action in her time as a representative is inexcusable. 100 energy companies have been responsible for 71% of all industrial emissions since human-driven climate change was officially recognized; how has Rep. Eshoo held them responsible? The answer is she hasn’t. We need to take swift, decisive action to combat the growing threat of climate change.

Rep. Eshoo has had plenty of time to take decisive action and simply hasn’t, we can’t trust her to be any different now . What makes it even difficult for Rep. Eshoo is her campaign contributions from PG&E, effectively tying her hands, instead of pushing PG&E for urgent action to upgrade their infrastructure and prevent recurring fires across California.

On the other hand I, Rishi Kumar, am committed to the Green New Deal and upending our transportation infrastructure to further cut down on gas emissions. I have already pushed many efforts to combat climate change. Real impact! I voted in favor of Building Reach Codes that were passed by the Saratoga City Council to advance the construction of healthier, safer, emissions-free buildings. I voted for the formation of Silicon Valley Clean Energy (SVCE), a Community Choice Energy initiative which provides 100% clean energy to 13 Silicon Valley cities. Since 2017, SVCE has committed over $1 billion to build new renewable energy plants while saving customers more than $50 million in electricity costs. I believe in real impact — especially with Climate Change being a known ticking time bomb, something that is drastically altering people’s lives and our economy. Actions speak louder than words, and I have proven that I am ready to take action.

How about Rep. Eshoo on transportation? In California transportation is the leading source of greenhouse gas pollution, accounting for about 40% of the state’s emissions. While Rep. Eshoo “plans” to address this problem by vaguely mentioning increased vehicle efficiency on her website, I have a concrete plan to reduce emissions. Rep. Eshoo’s transportation agenda does not provide any strategic vision or long term solution for over 168,000 Bay Area commuters or millions of local drivers stuck every day in Silicon Valley traffic jams. California’s housing crisis contributes to our climate crisis by forcing residents to travel farther commutes in their already inefficient cars to get to work. My plan addresses both the housing and traffic challenge. My plan to introduce a zero GHG, high speed transportation will decrease emissions by providing viable public transportation, alleviate the housing crisis and help create better access to quality jobs, all while being more convenient to our constituents! You can find specific details here.

As an environmentally based organization, why support Rep. Eshoo who has made vague promises on this increasingly important issue with no clear direction, when there is a better alternative? I urge the Sierra Club to reconsider its endorsement of Rep. Eshoo and to consider a candidate with a real plan to address our environmental issues.

Silicon Valley and America need a new way forward. I humbly request your consideration to overturn your endorsement of Rep. Eshoo and for helping me take this fight to Washington.