As to Anna Eshoo, I don't remember she made any contribution to our community besides being a powerful fund raiser for the Democrat Party and a stern follower of Pelosi.

Regardless of Perski, after some 27 years in Congress, Anna should really retire and let someone else who has more energy and ideas. Greg Leung
I’m really shocked Thanks for sharing this info Linda Conroy, San Jose
Big NO on Anna Eshoo! Jonica Dow
I’m really shocked Thanks for sharing this info Linda Conroy, San Jose
Big NO on Anna Eshoo! Jonica Dow
ANNA ESHOO we don’t want you! The solder I support 100% Eddie Vandervoort
I am VERY disappoined in Eschoo receiving $$$ from PHARMA.I will NOT be voting for her😟😟😟😟😟😟😟 Madeline Chappelle
Thanks Anna for your support of High Speed Rail. I can't wait to spend $200 to travel to LA in only 4-5 hours. And it will only cost us $180 billion or so in taxpayer funding. I agree with Anna that HSR is much more important than schools or health care. Martin Mazner (NA)
Emy Thurber Are you saying that we have the healthcare system we need? I think it needs to be changed. If Anna was instrumental to this policy as you say, she also needs to be removed Lenny Pollak (NA)
I wouldn’t hold a long tenure against her but what has she accomplished? Nothing that I’m aware of. Lenny Pollak (NA)
After 28 years, Anna's gotta go. No career politicians! John Gordan (NA)
About 12 years ago I asked for help from her and got a big snub! It was a sad day for me. She had a rep. talk to me instead. No help at all. and I will be voting in November. and it will not be for eshoo. Federico Flores (NA)
Risa Ann Bernasconi I to went to her office and she was in but did not have time for. Federico Flores (NA)
28 years in Congress ?? Time for someone else to take over. This should apply to each and everyone in Congress / Senate. Christoff MK (Carmel Highlands, California)
Federico Flores if you are a big donor to her campaign, oh my. She will be answering your call in seconds. Should not be that way but that’s how it is. I don’t vote for the same candidate TWICE !! I believe everyone must have the opportunity to represent each constituency. Not that they get elected and go to DC to get old. 28 years was way beyond too long in DC!!! Christoff MK (Carmel Highlands, California)
Gabriel Young time for voters to REJECT such candidates !! They will NEVER serve the voters in that constituency but the DONORS !!! Christoff MK (Carmel Highlands, California)
I physically went to her office about a year or so ago to express my concern about the separation and caging of immigrant children and families. I was barely given the time of day by her office staff and never had any follow up communication of substance. Risa Ann Bernasconi (NA)
Entrenched CAREER POLITICIANS will never be for anyone but themselves! Get rid of them all permanently Kelly Plunkett (NA)
She’s never seen in the news unlike Ro Khanna. Unlike Kamala Harris. Zoe has been there a long time too, but look at her as an impeachment prosecutor . She’s been in Congress too long. I don’t dislike her, but we need fresh thinking. Crystal Casey (Palo Alto, California)
As chairman of the US House Health subcommittee, Anna Eshoo certainly bears some responsibility. I have not seen her ONCE speak to the nation about the pandemic. The US response has been totally chaotic and inadequate, and yet she has claimed credit for working on it for 15 years. Clearly, her work was quite ineffective. We need someone new. Gosia Hoot (NA)
Margie Glantz It was her job to prepare a pandemic response plan. She had 15 years to do it. It was a failure. Jim Somers (Redwood City, California)
She's not merely trying to befriend Big Pharma; she fully befriended them a long time ago. She holds the distinction of having been the recipient of more money from Big Pharma than any other member of Congress. That's how friendship is measured in D.C. Jim Somers (Redwood City, California)
Can't anyone beat this **** Pelosi clone? Awful for decades. Gordon Landreth (Menlo Park, California)
Somebody please defeat the Pelosi clone! Gordon Landreth (Menlo Park, California)
She’s part of the club making her part of the problem. Greg Lustig (San Jose, California)
Get the 💰 out of politics! Stop contributions, money driven Elections, paid lobbying and corrupition Ali Maddening (NA)
Vote Eshoo out. NOBODY should hold an office in politics for this long. Mandy Gundersen (NA)
voter her out Sara Ajagu (NA)
Vote her out! We need new blood! Anne Talma Gamlin (NA)
In the pockets of big pharma 😤 Dawn Smith (NA)

Below are comments made to the following Facebook Ad by AARP in support of Anna: 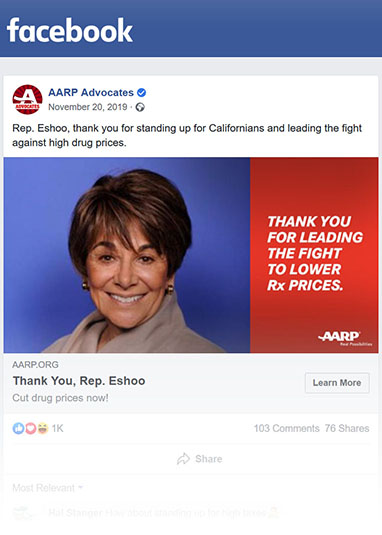 I'm not voting for you again (Anna). I searched each week for months to see if you had finally added your name on to impeach Trump. Every time I checked I was disappointed. You don't get to ride the fence, trying not to anger rich republicans, but not taking a stand for what you know is right. I suppose your name is signed on by now but I'm over checking it. I'm done. You didn't take a stand when it was the hard thing to do, I don't care if you've done it now, when it's easy to do. When you are looking at evil you need to face it and take a stand. You didn't. I hope a democrat runs against you, one that I can respect Phoebe Klemz
Sure, AARP, she's fighting really hard. Rishi Kumar doesn't take money from the healthcare or pharmaceutical industry… Laura Livengood
Anna Esho's leading contributer is the Pharm industry. Hard to believe she is really fighting them. Allen Fitzpatrick
Garbage. Embarrassed that she’s our rep. Corporate puppet/career politician Trevor Raineri
Crony capitalism at its worst. And the corrupt AARP has been in the middle of it. Jeffrey Morrison
This woman is a joke. Of course, so is AARP. Jimmy Joe Lee
Eshoo hasnt lead ****. I'll be voting for her primary challenger, Rishi. An endorsement to Eshoo, makes me question the person/company/org. Justin SanDiego
Another person who gives the illusion that her “program” is working, when in reality she is gouging the market for her own benefit. Shawn Dormish
She is bought off by big pharma. Brandon Henriquez
AARP is just another not-so-trusted institution pushing propaganda for a rep on the take. Eshoo is a Pelosi-light. Casey Grittman
I love these comments. I went to the pre-election debate between her and Christine Russell, I cannot believe she continues to get reelected. I guess it shouldn’t surprise me in Northern California. She is Pelosi-lite Tim CornPop Daniel
Tim CornPop Daniel she’s a swamper whom we must be get rid of. She’s in the pocket of Pharmaceutical all the way:(( Carmen Yousef Benjamin
Isn't Rishi Kumar for Congress 2020 a better candidate? It's time to elect from relatable people who care, not from those who are out of touch from actual constituents. Khan Nafee M Sadh
She takes more bribes, I mean campaign money, from big Pharma than anyone else in Calif. Kevin Scholl
On the pay roll far too long. Darlene West
She is all for her self not for people. Michal Younanzadeh
Lets get her to endorse M4A Thutam Nguyen
Thutam Nguyen she won’t, and that’s why I support her progressive challenger, Rishi Justin SanDiego
Get your head out of the clouds and do something for the people instead of follow the party line Ross Bridge
Anna Eshoo you ...have done absolutely nothing to help your constituents . I see your allegiance to AARP is still in tact . Go to work like you were elected to do . Your seat will not be safe for long. Steve Welch
She keeps getting votes. Why? That's the problem. Daryl Anthony Biancucci
What precisely did she do to cut drug prices. John Hammink
You misspelled the title you meant to thank her for the high medical prices and for lining her pockets while doing so. Scott Cameron
Most politicians gouge the people who voted for them, not only do they take the job But take bribes from the biggest Pharm companies and it turn they increase prices on Us to pay the politicians that keep the prices increasing. Rachel Silvas Dewstone
TERM LIMITS Shawn Cooley
Eshoo is a neoliberal shill and I'm looking forward to her being replaced by a progressive.Get off my feed and take your pharma money with you. You are a disgrace. Sean Love
Anna Leads from behind. Doesn’t make a move that’s out of step with Pelosi. Career politician who’s become complacent. Dana Brewer Harris
Price fixin’. What could go wrong? Lol. Jason Zumwalt
Eshoo is a ****, thanks for nothing! Elvyra Hancock
It’s time to eschew Eshoo. Enrique Muñoz Torres
Crawl back in your hole Richard Bontempi
Get rid of her, drain the swamp Alan Eagleton
Below are comments made to the following Article in the Daily Post: 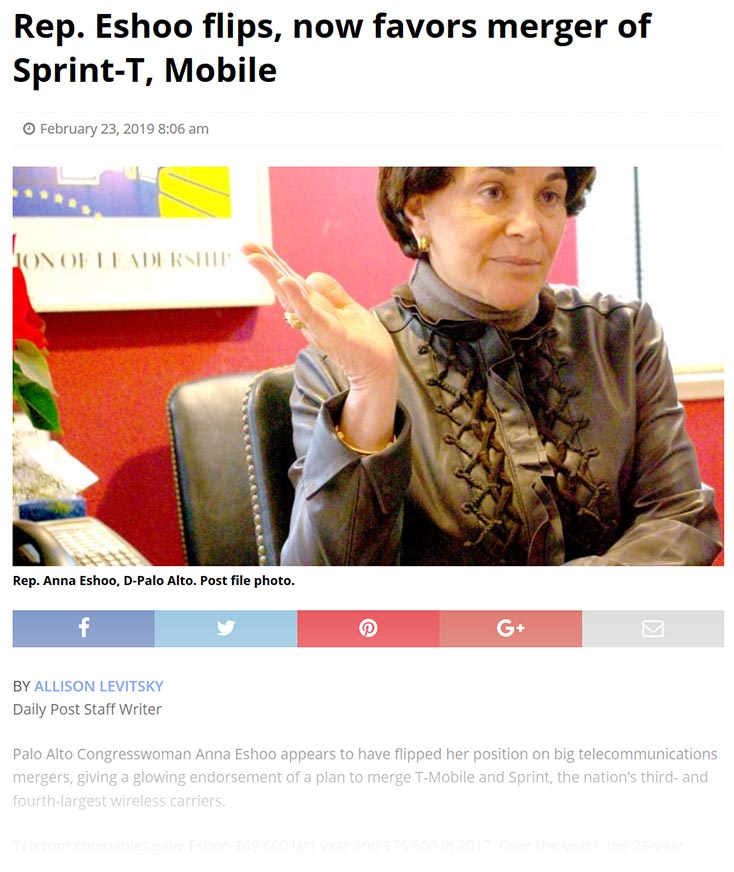 When enough shekels hit her purse, the vote flipped. Hawkeye
I don't get the logic that fewer players would mean more competition. I think it would be the opposite, more companies means more choices for consumers, ergo more competition. Carmen
The answer isn't to allow two companies to merge. Her response should be to break up AT&T and Verizon into several smaller companies. Instead of three players, how about 10? In the early 80s, you may Eshoo's predecessors (people like Tim Wirth and Bob Packwood) successfully split Ma Bell into several regional carriers. With several phone companies, rates fell. With a separate company to sell equipment, and no requirement that it come from Ma Bell, the cost of a phone dropped. MCI was allowed to compete with AT&T in the longlines business. Breaking AT&T up lowered consumer costs and opened the door to the explosion in wireless technology. Today, the idea of allowing four carriers to become three is a step in the opposite direction. We should push for 10 or more companies. More competitors means lower rates. Ms. Eshoo, you remember Tim Wirth. What do you think he would say? Roy Burke
Readers should know that seven Democratic senators (four of whom have announced their candidacies for president in 2020)and independent senator Bernie Sanders (who has also announce a presidential run) have jointly sent letters to the FCC and the Justice Department, that also has jurisdiction in merger cases, urging them to reject the proposed merger. In their letter, the Senators argue that the merger would be a "sharp blow to competition in the telecommunications industry" and would "eliminate competition that has been shown to benefit consumers and stifle the emergence of new carriers" (see https://thehill.com/policy/technology/429618-dem-senators-urge-fcc-justice-department-to-reject-t-mobile-sprint-merger and https://thehill.com/policy/technology/428619-t-mobile-sprint-step-up-merger-push). Eshoo's position in this can be best explained by the mountain of money she has received in career contributions from telecommunications corporations. (This parallels her even more fervent work in protecting the pricing power of drug companies who have made her the fourth biggest career recipient of drug company contributions after Barack Obama, Hillary Clinton and Orin Hatch. See https://www.sanjoseinside.com/2019/01/10/op-ed-rep-anna-eshoo-needs-to-answer-for-ties-to-big-pharma/) Salem