An engine idling for 30 years

Rep. Eshoo’s 30 years in Congress have failed to deliver tangible results - just 4 trivial bills. A very good job by Rep. Eshoo in claiming legislative success in campaign mailers and districtwide emails, but the 45 she claims unfortunately never became law. Would you miss a basket and still claim credit? By glorifying her cosponsorship of bills, she has very successfully blitzed Silicon Valley with Washington glitz and glamor. Rep. Eshoo’s ballot statements for many years have never been about accomplishments or results, only forward looking political platitudes that only appeal to our eyes and ears. Why? Because there were no accomplishments to discuss. And the cycle repeats every two years. If you analyze the weekly emails sent out by Rep. Eshoo’s office, you'll find that the emails are long, but are never about actual results delivered to the community. Rep. Eshoo is increasingly out of touch and concerns have grown on why she has sold out to Big Pharma being the #1 recipient of pharma money in the U.S. House of Representatives. 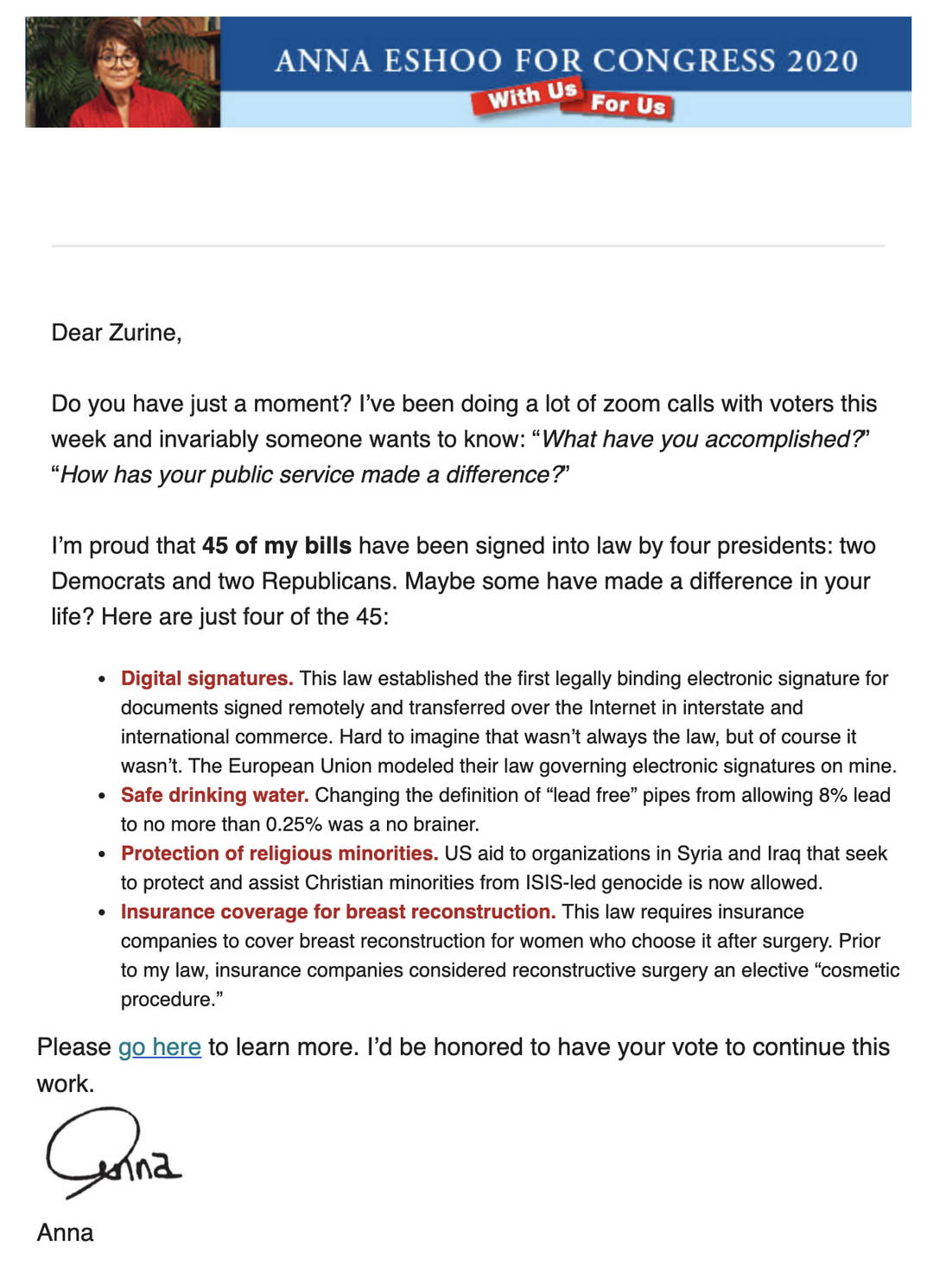 In 30 years, Rep. Eshoo has had only 4 bills that became law. Two of her bills renamed a post office and a federal building. Another designated a month as National Scleroderma Awareness Month and the fourth modified provisions to determine payment at children’s hospitals, making them account for the cost of teaching residents.

However, in her emails and mailers during the 2020 election, Rep. Eshoo claimed that she passed 45 bills. This is clearly a case of misleading voters with lies and half-truths. Below, we will dissect and dispute her emails claiming 45 bills. Rep Eshoo‘s claim that 4 presidents have signed her bills is incorrect! President Bill Clinton was in office was for two of the four trivial bills she passed.

Note: Not many congressional members in the history of the U.S. Congress can claim 45 bills. So what is the truth? Let's analyze an email sent by Rep. Eshoo during the November 2020 General Elections. See for yourself an image of the email sent to district voters.

The Millennium Digital Commerce Act was introduced by Eshoo in 1999. Why is Rep. Eshoo leading with a 1999 bill that never passed in a 2020 accomplishment email?

Safe Driking Water Act: Rep. Eshoo proposed a bill in 2010 to amend the Safe Drinking Water Act to reduce lead in drinking water: a simple amendment to a historic bill from 1974 - not exactly bragging rights.

Reconstructive Breast Surgery Benefits Act of 1997: This bill died in the House.

There are 3 categories of mailers we see from Rep. Eshoo:

Please keep in mind that the mailers below are the work of well paid political consultants.

Below is a mailer sent by Rep. Eshoo during the November 2020 election.
These bills referenced are supposedly the work of Rep. Eshoo. Let’s dissect them. 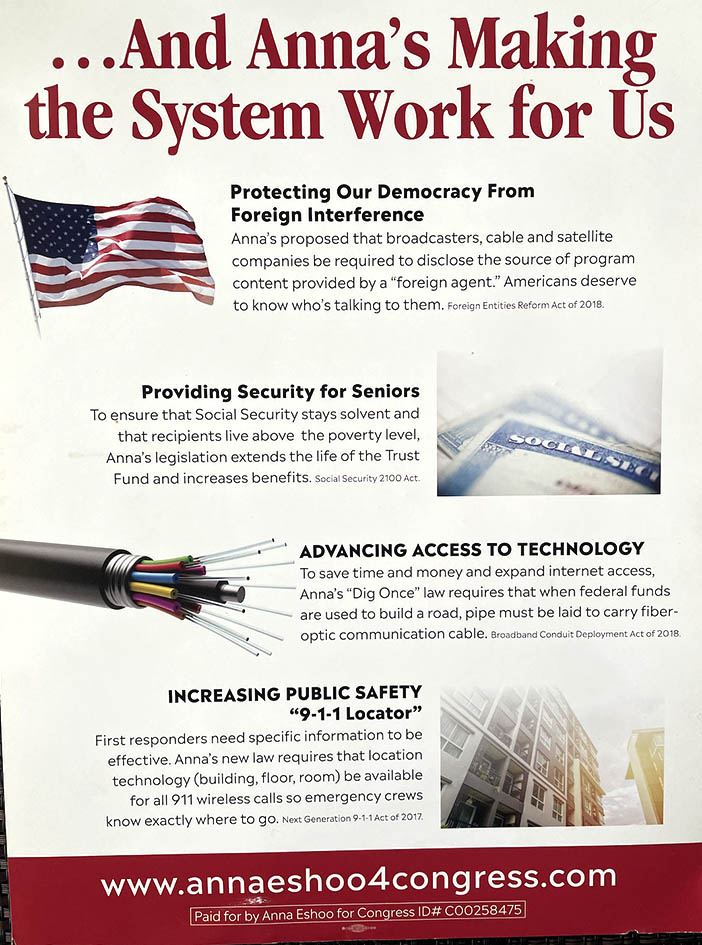 If you follow this link, you will see that this act was never passed. It was sponsored by Rep. Eshoo, but never became law. It should not be appearing on a mailer.

Rep. Eshoo should not be claiming credit for this. It was sponsored by Rep. John Larson, and she simply cosponsored it along with 208 other representatives.

Again, this one did not become law.

This bill was first introduced in the Senate by Senator Nelson (FL). Even though Rep. Anna Eshoo was a sponsor of this bill in the House of Representatives, she simply copied Senator Nelson’s proposal word-for-word and marketed it as her own. Additionally, this bill never became law.

In the mailer below, Rep. Eshoo claims to have lowered prescription drug costs. The reality is that the legislation she has sponsored tells us a different story. Rep. Eshoo is the chair of the House Health Subcommittee and has proposed legislation that would increase the cost of healthcare for American citizens by severely restricting access to cheaper generic drugs in favor of name-brand drugs in the Healthcare Overhaul Bill of 2009-10. 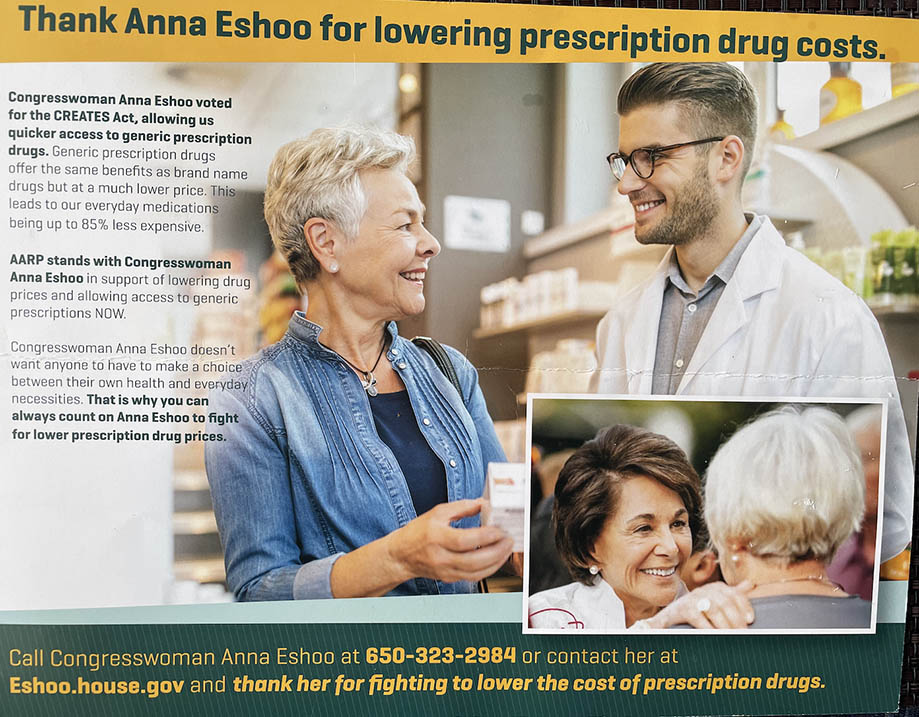 As the chair of the House Health Subcommittee, Rep. Eshoo led the charge to increase our healthcare costs - not lower them as she claims. How can a congressional rep invest in medical research? How has Rep. Eshoo’s work helped in lowering the maternal mortality rate? What specific bill led to that? 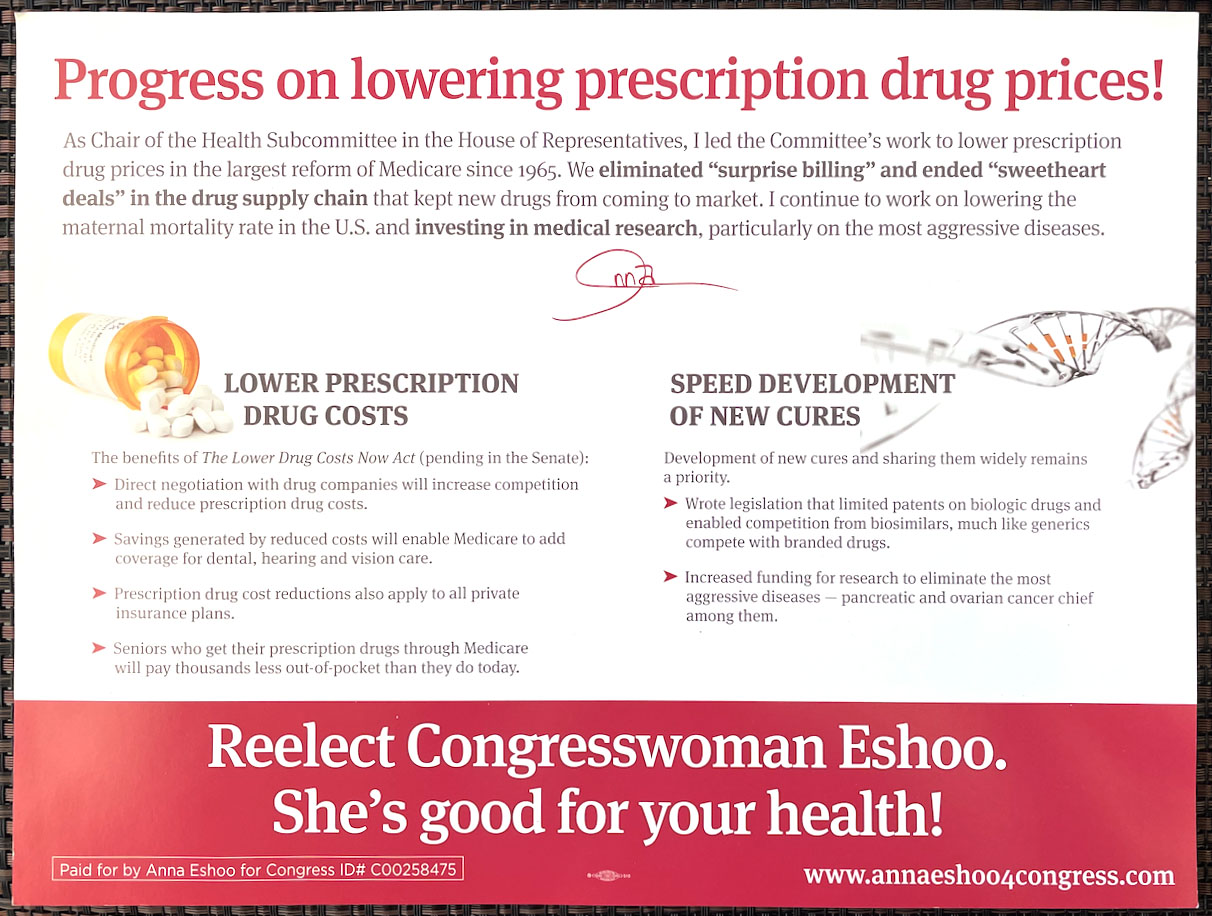 Never got passed. Also, the chief sponsor is Rep. Frank Pallone. The rest of the bullet points have no merit, as the bill never became law.

It relates to biologic drugs, and the true story is explained by Salem Ajuni very well here. Basically, Rep Eshoo gave drug companies a 12-year monopoly on complex biologic drugs instead of 5-8 years which is common for other drug types and was pushed for other representatives. This provision set the time it takes to see generic versions of crucial drugs unnecessarily high, including those that treat cancer. With this provision, Rep. Eshoo actually protected Pharma profits. It was clear that a limit on the monopolies of biological drugs would be passed, so she made it as high as possible. This is not surprising when taking into account the fact that she is the biggest recipient of big pharma money in the House of Representatives. Yet again Americans suffer at the hands of a politician that only protects her own interests. Rep. Eshoo actually led the fight to make introducing generic drugs more difficult - against what President Obama was promoting back then. Rep. Eshoo claims that she has increased funding towards pancreatic and ovarian cancer, but what she is likely to referring to is an amendment and a bill that never passed. The proposed amendment would have increased funding towards ovarian cancer and the proposed bill might have helped address pancreatic cancer, if either had become law.

What do local healthcare leaders say about Rep. Eshoo?

From this source: Despite years of holding key positions in the Health Sub-Committee of the Energy and Commerce Committee, a strategic sub-committee you have chaired since January 2019, you feigned ignorance about the significance, or even the basic definition of, Medicare for All, despite the existence of pending bills in both the House (HR 1384) and the Senate (SB 1129). Indeed, you sounded like an onlooker or a bystander in health care debates, rather than a key policymaker and gatekeeper. In order to wash your hands of the matter, you even falsely claimed to us that the Energy and Commerce Committee has no jurisdiction over Medicare... Your own record as the currently sitting all-time, all-star congressional recipient of drug, medical device and health product lobbyists’ money is a case in point. It pits you squarely against the type of health care reform that would so greatly benefit hundreds of thousands of District 18 constituents and tens of millions across the country.
- Salem Ajluni, Santa Clara County Single Payer Health Care Coalition 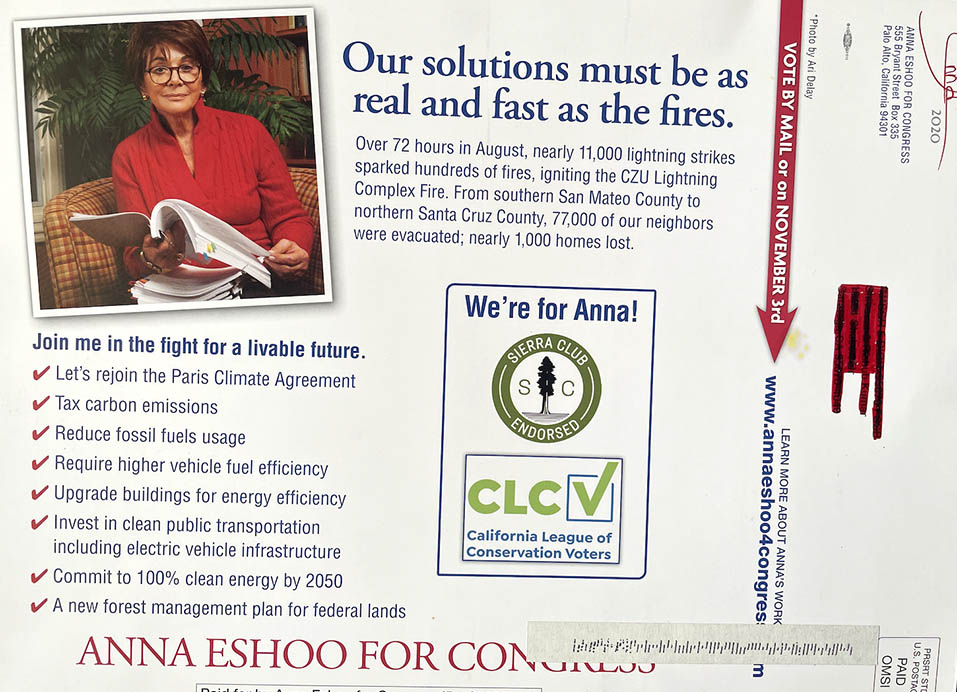 Rep. Eshoo is addressing the September 2020 forest fires in this mailer sent during the November 2020 election. But there is clear inaction with the California forest fires. At the 2020 debate, Rep. Eshoo said we haven’t updated the fire plan in 100 years. But she does not have a track record of addressing California’s annual fire problem. At their debate, Rishi called out the fact that she supported fossil fuel subsidies by voting in favor of H.R 4447, a bill criticized for perpetuating California’s wildfires. 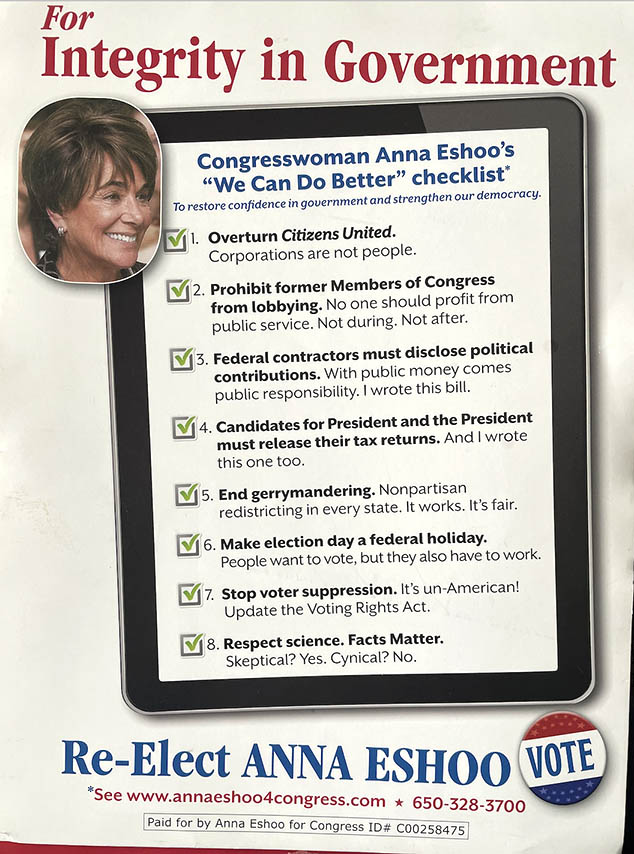 In this mailer, Rep. Eshoo talks about integrity in government. However, box #1 goes against her actions. As the chair the House Subcommittee on Health, Citizens United has allowed for her to accept large amounts of money from pharmaceutical companies, making her the #1 recipient of Pharma money in the U.S. House of Representatives. In return, she represents their interests in Congress by sponsoring legislation to increase healthcare costs. Rep. Eshoo can talk about Citizens United if her action backed it up. The rest of the checkboxes are excellent statements on paper - but nothing has been done by Rep. Eshoo to take action with the statements. 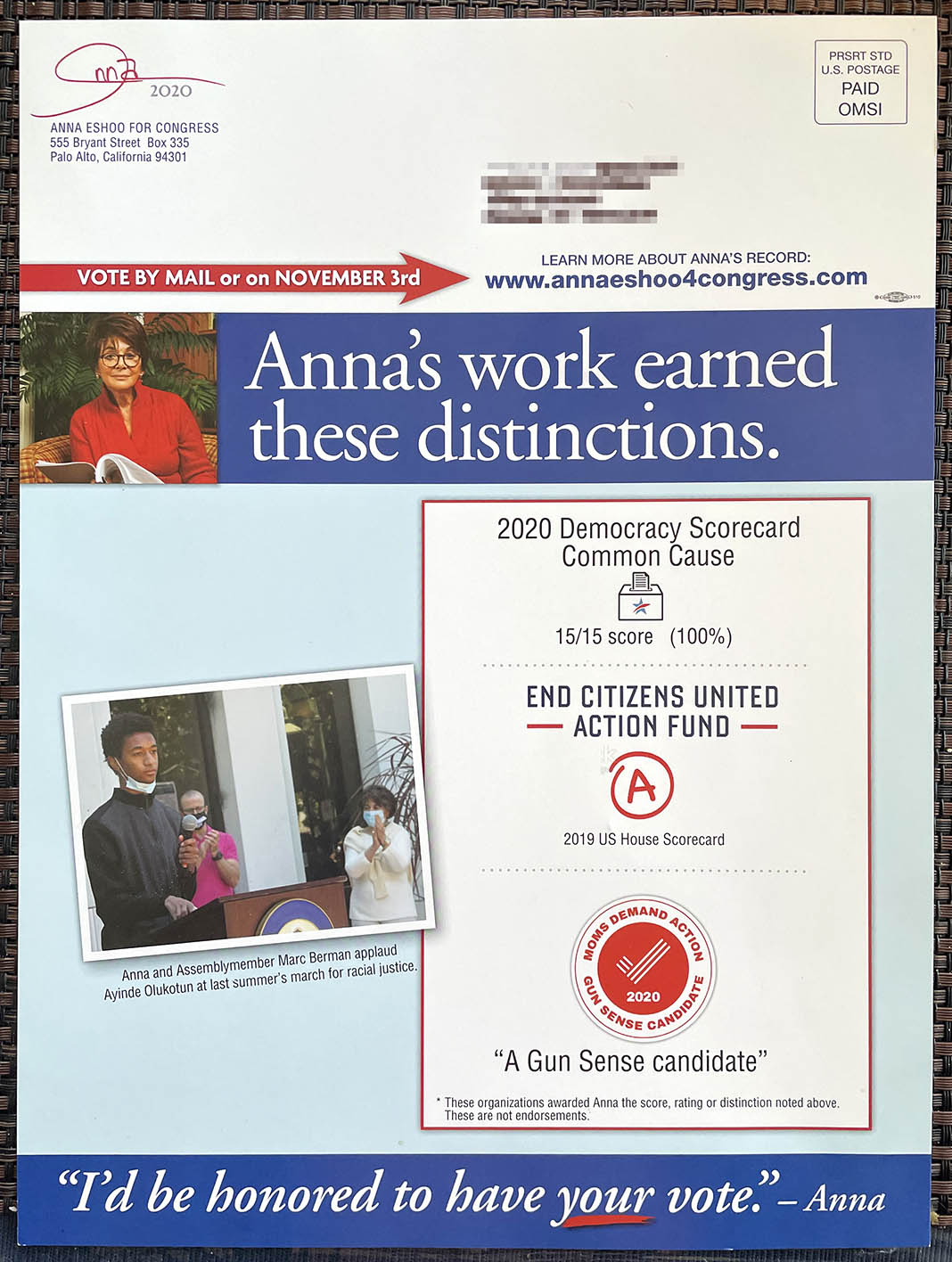 Many mailers display the many endorsements received like the A-rating from End Citizens United and many more such endorsements that are hollow. In actuality, the endorsements of such organizations have no merit when her actions are taken into consideration.