Are you ready for a change of guard?
Primary Election: June 7, 2022 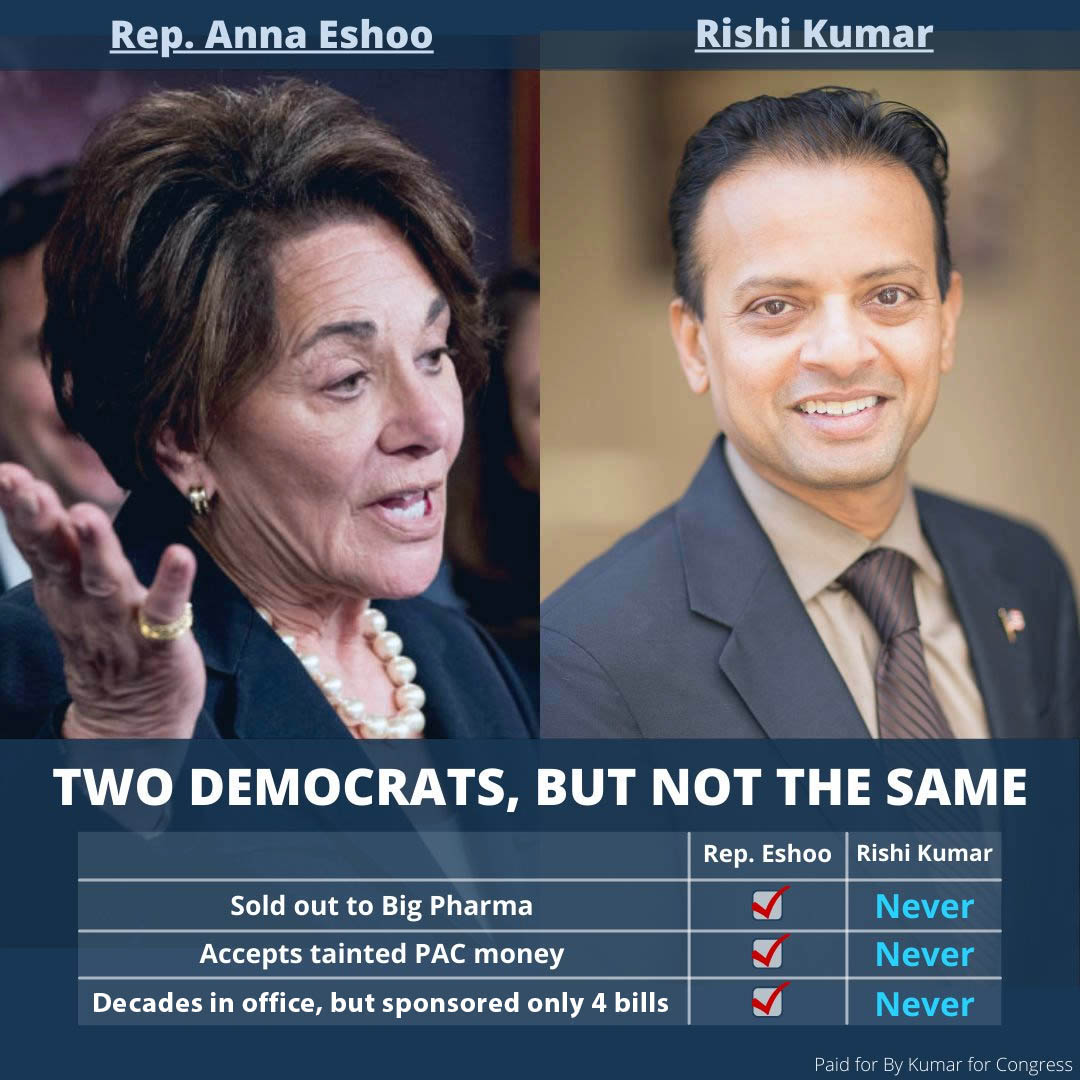 Holding us Back Democrat

Elected 1992 to Congress at age 50. 30 years in office already, but only 4 trivial bills legislated. Her 44-year long political career began in 1978, and it is clear that she is not representative of the urgent action needed, or of today’s values and aspirations of our citizens.

Reelected with the most votes in 64 years of Saratoga's election history for fearlessly tackling the tough challenges. Garnered the most votes compared to any Rep. Eshoo challenger in 30 years during the Nov. 2020 election. Executive in the Artificial Intelligence, Analytics industry.

Why is this report card relevant for us?

If we truly want to create a better future for every American and preserve America's superpower status, then we need someone who will fight and deliver. We do not need more sellout politicians who make empty promises and play partisan politics dexterously. We have nothing but respect for Rep. Eshoo’s 44 years of long-standing public service. With this report card, we are highlighting the American issues that demand our attention, and the viewpoints of 3rd party sources that have largely stayed below the radar, sans a serious challenger the past few decades. Highlighting the policies and/or shortcomings of the opposition is not "negative.” The context of the past failures are necessary learning and vital in forging a new way forward, with new energy and new leadership. If we don’t, we cause irreparable harm to future Americans and the future of our country. 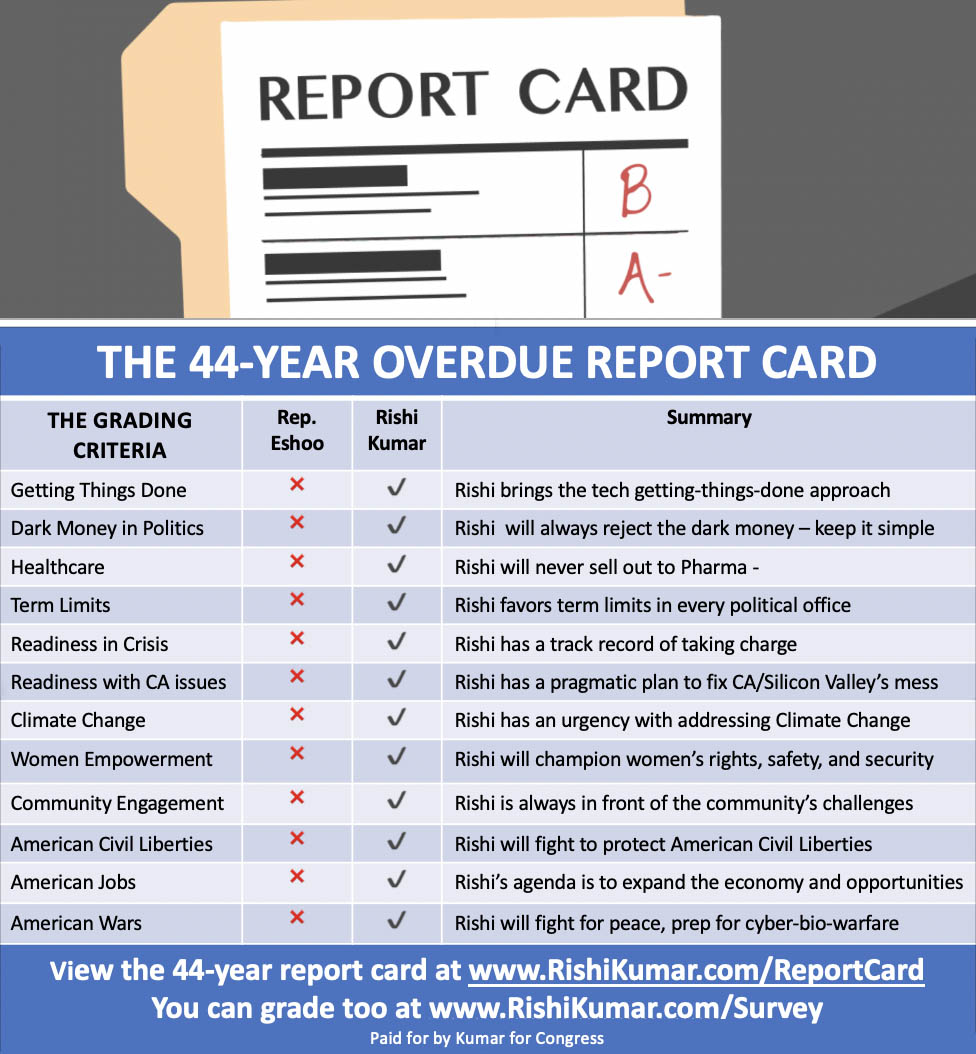 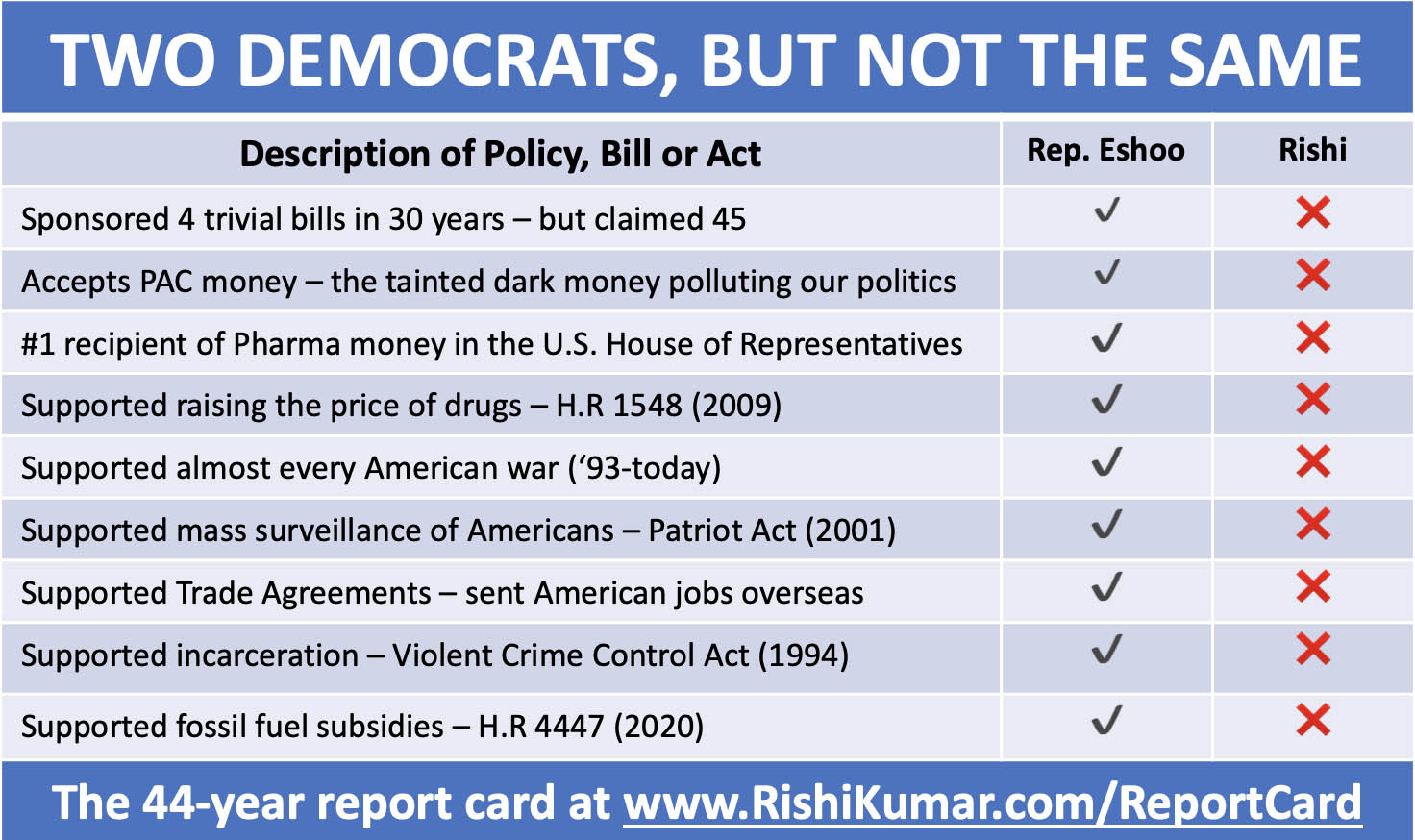 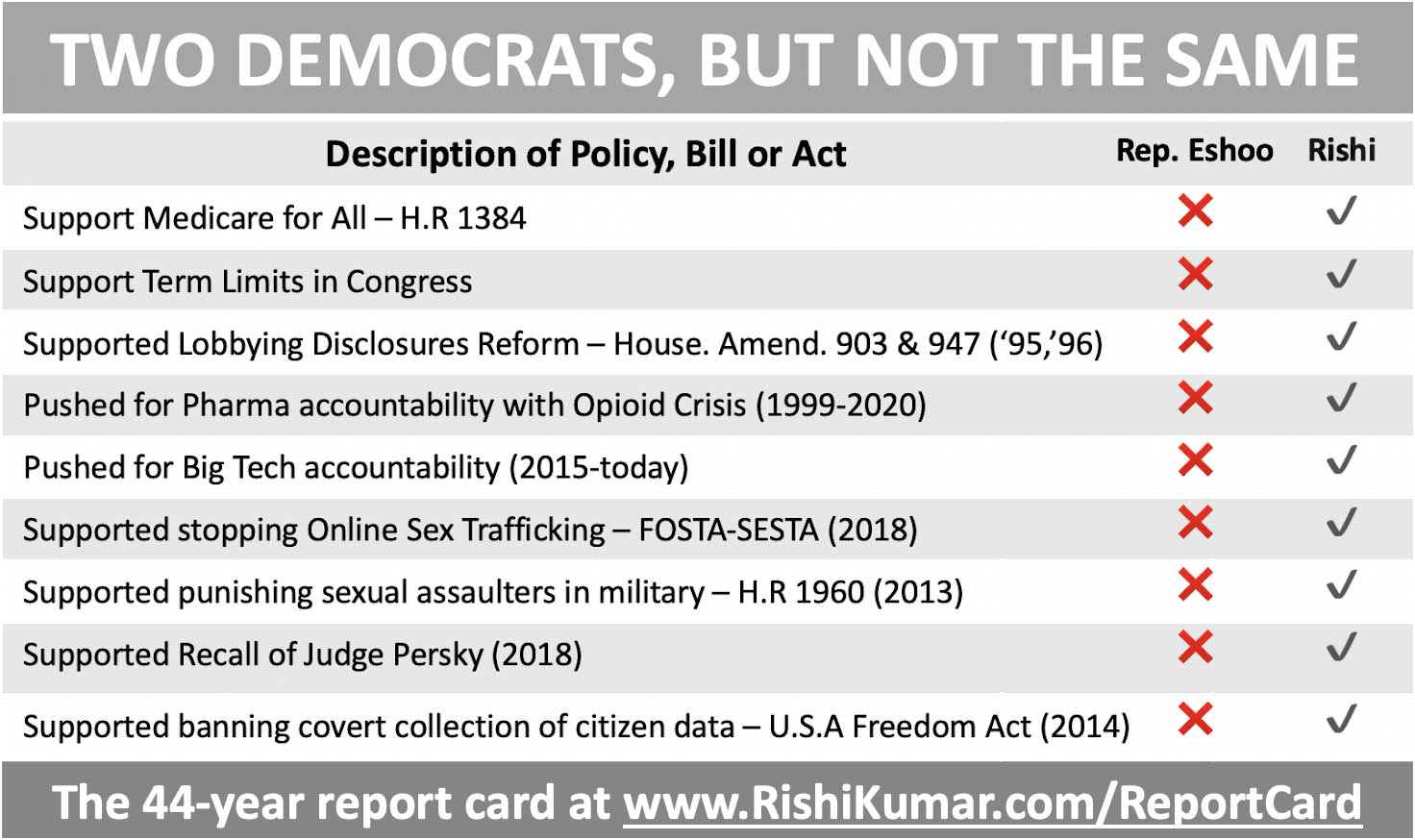 The Getting Things Done Grade

Rep. Eshoo failed to legislate
What use is a powerful platform and a leadership role when politicians sell out?
Rishi Kumar brings the tech framework of an innovative getting-things-done problem-solving approach 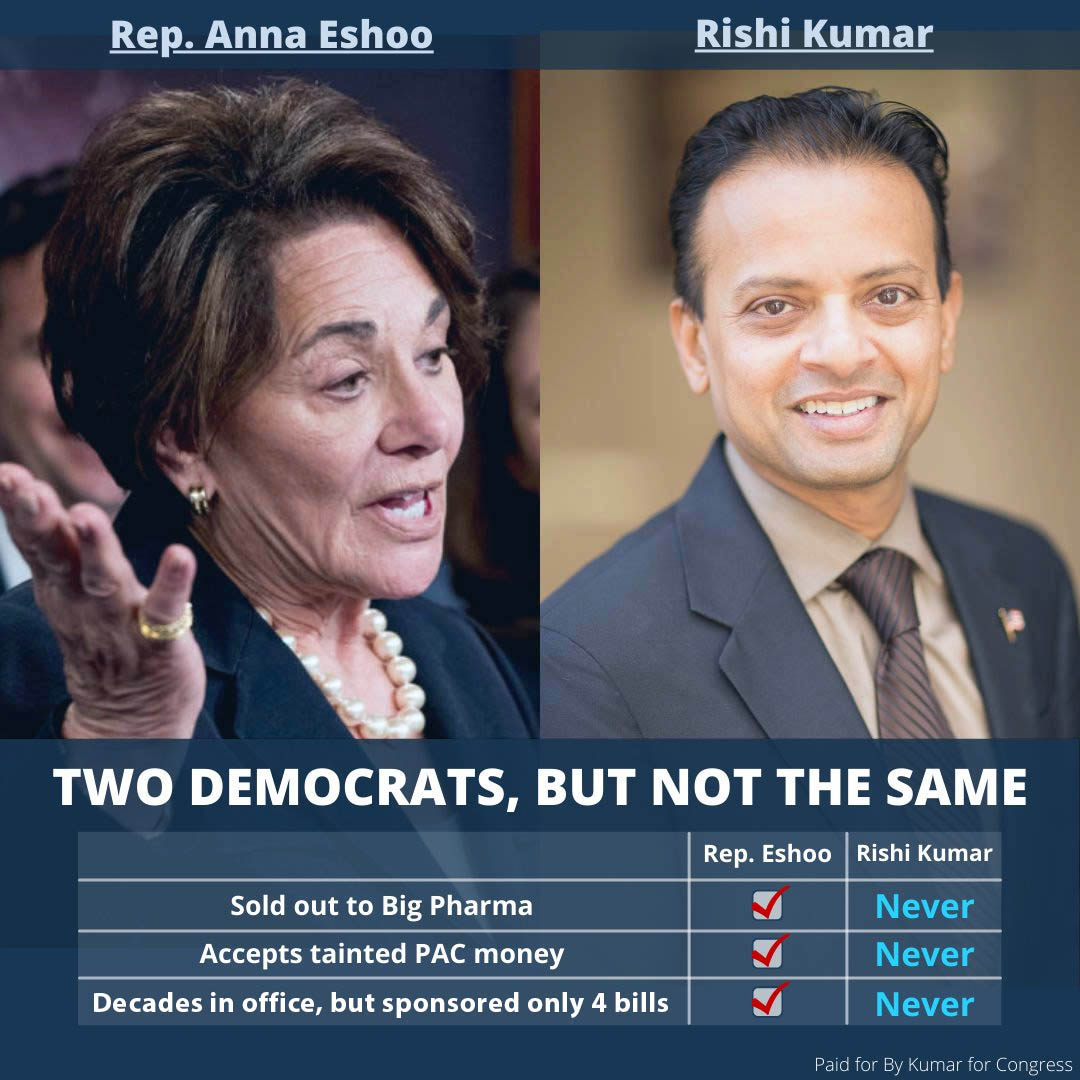 The Dark Money in Politics Grade

We are concerned by the donations Rep. Eshoo has accepted from the pharmaceutical industry.
- Stanford Daily

After the Stanford Daily shared their concern for Rep. Eshoo’s ties to Big Pharma, Rep. Eshoo herself ADMITTED to receiving millions from the industry while justifying it. The justification didn’t convince us.

The Medicare for All / Healthcare Grade

Rep. Eshoo is doing Big Pharma’s bidding!
Rishi will never sell out to Big Pharma
We get it – There's nothing wrong with Pharma sellouts, it was just the old school way

The American Affairs Journal draws attention to the gerontocracy of American politics by stating: by 2024, for twenty-four of the previous thirty-two years, America will have been led by people born in or before 1946. and Perhaps the pharma lobby is so successful because it is not only the biggest donor but probably the largest vendor to the assisted living facility that is Congress.

Rep. Eshoo is in her 15th term
Rishi is a firm believer of term limits

Rep. Eshoo has failed with the factors underlying the exodus
Rishi has a pragmatic plan to address the exodus

Rep. Eshoo failed to legislate and address our Climate Change

At the 2020 debate, she took credit for the Green New Deal as a cosponsor even though the bill had a few hundred cosponsors. Rep Eshoo increased federal subsidies for fossil fuels (8/2020)- by voting Yay for H.R. 4447 - it was a Nay vote by progressives. Watch the debate on climate change and the response.

Rishi Kumar believes we have a ticking time bomb at hand:

Rep. Eshoo failed to protect women – was against the recall of Judge Persky, who gave a proven sexual assaulter only 6 months in prison - a lightweight sentence that was largely perceived as favoring the entitled. She also voted against allowing states to fight online sex trafficking (Fosta-Sesta) - which was supported by 174 of her Democrat colleagues and violated the privacy request by Christine Blasey Ford in the Brett Kavanaugh assault case. Beyond this, Rep. Eshoo voted against HR 1960, a bill that makes it easier to punish sexual assaulters in the military.

Rishi will protect women’s rights – adamant about protecting women from sexual crimes, enforcing the right to equal pay, and ending the bro-culture in Silicon Valley tech. Rishi was one of the first people to call for the recall of Judge Aaron Persky, whose awful verdict allowed rapist Brock Turner to get away with the heinous assault he committed with a light sentence.

Rep. Eshoo has been invisible – Rep. Eshoo is in her 30th year in office, but how many times have you seen her publicly? Since 1992, she has held the same teleconference calls - not face to face or over zoom. A teleconference call this day and age? Rep. Eshoo failed with her weekly email blasts that always miss a key piece of info - what problems were solved over the last week. It has been 30 years of “activity for the sake of activity” and dexterous partisan politics without any genuine actions taken to help her community.

Rishi held three face to face town hall meetings every month (pre-pandemic). Rishi continues to host “Ask Anything” town hall meetings over zoom that are never censored or orchestrated. He has held over a hundred neighborhood meetings as a councilmember to solve key challenges within the community. Community engagement and responsiveness is a very important agenda for Rishi. He has met with more neighbors this year than anytime else in his life combined - which demonstrates the value Rishi attributes to meeting people and getting a pulse of the community.

Rishi Kumar supports revamping many of the existing trade agreements – wants to get the American workforce ready for the AI/ML automation that is coming. Rishi was endorsed by South Bay Labor in 2014 and 2018 for both of the city council runs.

Rishi will fight for peace – reduce our defense spending by engaging in regime change wars or wars for “nation building,” and boster our defense for cybersecurity, ransomware, biowarfare, and bioterrorism.

Click here for more of Rishi's policies. Or use the search box in the header